Review: Up in the Air 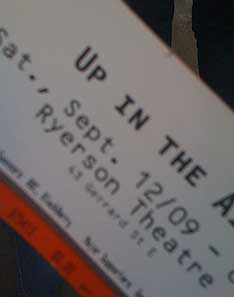 Note: After spending much of my time in my seat angrily tweeting about the movie starting late because of the talent on the red carpet, then Oprah came into the theatre with Gayle to watch the movie and for a moment I lost my damn mind. I liked-nay loved the movie but I fear the Oprah Effect may influence my overall feeling awesomeness because of the mere proximity to the mighty one.

Second note: This movie was introduced by Jane Schoettle whom I LOVE and directed by Jason Reitman who told the audience at the Ryerson that he was offered a chance to be in the Gala program and said no so that the real movie fans could see his film. If I didn’t love him before…ah hell it just made him even more adorably fantastic. And in the Q&A he gave a shout out to his dad for writing one of the biggest laughs in the movie – he may be one of the nicest people in the universe. And he’s talented. And has lovely hair. So basically this will be less of a review and more me trying not to be spoilery whilst gushing praise.

I love seeing Jason Reitman first screenings at the festival.  I’m three for three now and I have loved them all, and for both Thank You for Smoking and Juno I watched them again in the theatre when they were released. I anticipate this will be the case with Up in the Air because there were so many laughs, that occasionally you miss the dialogue.

Reitman has an eye for plucky tiny brunettes, and Anna Kendrick is bringing the balls to the wall intensity in this movie that you saw in her performance as Fritzi in Camp. The only thing that could have made it better is if her character actually sang ‘Ladies Who Lunch’ at some point. The difference in this film is that you get to see her redemption, where I imagine that Fritzi is still slipping the competition laxatives somewhere.

George makes us forgive all Ryan Bingham’s anti-social tendencies not with his smirks and quirks but by showing us that this guy knows he is flawed. When his sister asks him for a favour with the caveat that she knows he’s not great at ‘doing things for others’ he does not look really offended or resigned. He just continues with the conversation as she is merely stating a fact. His reaction to how small his contribution was to the picture project in comparison to the whole shows that he really has created a life outside-or above-others. He’s not entirely a sociopath, since he can empathize with others, he just chooses not to connect.

I want Sam Elliott to appear magially when I hit milestones in life. Odds are I won’t even hear the words, but damn what a voice.

Umm…something negative…the beginning credits were better in Thank You for Smoking and Juno. That’s about it. Flove.

TagsTIFF Up in the Air