Rules Of The Mixtape 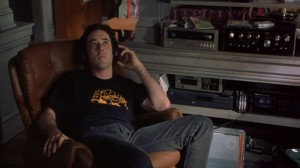 I keep feeling old this year. Maybe it’s that the demo of the member line skews a couple of decades above the crew I’m used to sharing a spot on the cold concrete with each year, or maybe it’s that I’m just old.

Probably that second one. Whenever someone asks me, as they inevitably do, what movie I’m looking most forward to seeing I want to ask them if they have ever made a mixtape. Back in my day, the kids would use cassettes and record music, sometimes from other cassettes, sometimes from records, and even occasionally from the radio, carefully hunching over the buttons in order to filter out any commercials. Those were tough times. We had to really work for our entertainment back then. It didn’t leave a lot of time for shenanigans.

Tangent. So, mixtapes. Or to put it in more common parlance, a playlist. When asked about what film out of the approximately 30 I plan to see if my legs and liver make it to the end of the festival I must always ask the person to consider the playlist. When making a playlist you do not try to fill it crap and include one awesome song that will make you want to just skip through everything else. You want it to start off good, build up to something great, then awesome, back to great, then good , then epic and so on and you must always finish strong.

2008 was the year I took everything I had learned about picking films through trial and error over the years. Every year since I have tried to duplicate the level of enjoyment I got out of the festival in ’08. I opened with 9.99 – unforgettable if only for the stop motion animated coitus. Then Lovely, Still a movie so engrossing that even having a Weinstein sitting behind me constantly checking his phone  and kicking my seat could not spoil my enjoyment. I followed those up with More Than A Game where a still cavalier LeBron cried during the Q&A and Every Little Step where everyone cried during the Jason Tam audition for Paul. There were a few ups and downs in the week but that year, more than any other year is why I keep doing this. I had the first screening of Slumdog where the entire audience at the Ryerson rose and clapped along for the end credits. In one of the daytime holes my friend convinced me to add the Wrestler – and that was also the year of Flame & Citron, Deadgirl, Apron Strings, The Brothers Bloom and Medicine for Melancholy.

I can’t pick a favourite before the festival starts. I can’t even pick a favourite after it’s over. If I did it right it’s all good. So today, with two more sleeps until it all begins as far as I know I have the perfect mixtape queued up and all I have to do is hit play.