On Sale / Off Sale 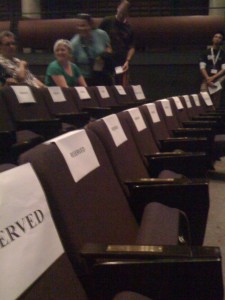 On Sale
Majority of these will be weekday, daytime second screenings with limited buzz and low probability of talent appearing – but could still be an awesome film.

Off Sale
They aren’t selling tickets anymore because they sold a crap ton initially.

How do you get a ticket for a movie that is off sale?

How do I “go rush”? Is Geddy Lee involved?
Going rush is a bit of a misnomer. It actually involves standing very still for a considerable amount of time. You must go to the theatre on the same day of the showing well in advance of the start time and wait, usually for an hour at least for something with anyone remotely recognizable that already has some kind of buzz or release date. If the movie has a title that someone you know who has never gone to the festival has heard of, then up that to two or three hours. The good news is if you are one of the first people in the front of the rush line you will probably get a in, either when the ticket holders are let in or from someone passing by with an extra ticket.
The other news is if you go rush you will either get a crappy seat or an awesome one. If you go rush with your 15 friends you will not get to sit together even if you all want to sit in the very front row.  However occasionally they open a block of reserved seats just as they let the rush line in, so you may get very lucky. But be careful – if you see a great seat still available for a packed A-list screening odds are the person next to it smells a bit and someone moved just before the rush line was let in. Give the area a sniff first. 86 minutes can seem a lot longer when you have stranger funk enveloping your personal space.