Review: From Up On Poppy Hill 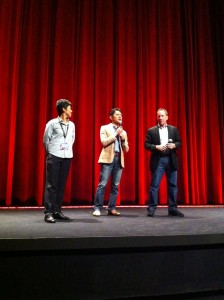 I love seeing at least one or two animated movies during TIFF. For one thing while an indie that has yet to secure North American distribution may not have had a final theatre-friendly cut to take the running time down to 100 minutes or less, most animated movies fall within a fairly comfortable running time for the knees and the bladder. The director tends not to spend too much time in scenes where a character is merely pondering or taking a moment, as that is hundreds and thousands of additional hours of drawing.

From Up On Poppy Hill did not disappoint in this area. The pacing of the story was excellent, but you did have time to get to know the characters. Umi, the female lead is introduced to us through her daily duties at home. Throughout the entire film the theme of duty keeps returning and we see how that affects Umi, and Shun the male lead.

The way Goro Miyazaki uses the animation of wind so keep a sense of movement in scenes where the characters may be standing still is fantastic. The contrast in the  colour palette in the school clubhouse compared to Umi’s house really makes us feel as if she is taking a step into another world as she starts to interact with Shun and his friends.

The story for Up On Poppy Hill is based on a manga geared towards teenage girls, so there is an element of the melodramatic, but it is nice to have an animated film with a female lead. This was a great first film for me to start off TIFF11.