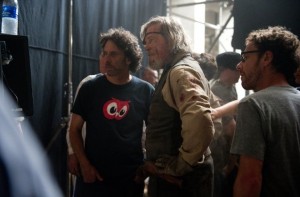 If Jeff Bridges hadn’t already won an Oscar last year for Crazy Heart I would say he should get one this year for this performance as the antihero with grit. There were moments where he got dangerously close to being over the top as the whiskey-soaked Marshall, and the performance in less controlled hands might have just been comical. The heroic turn the character has to take in the third act, after being portrayed for most of the movie as a trigger-happy drunk who would shoot a man in the back is believable because of Bridges.

The other performances from names you would recognize were great as well (Damon, Brolin) but I would have to give best performance of the film to Hailee Steinfeld. She plays one of the most single-minded and determined characters I have seen onscreen since Javier Bardem’s performance as Anton Chigurh in No Country for Old Men. Her portrayal of Mattie Ross makes me believe that this 14 year old girl with a score to settle will get satisfaction, one way or another.

Overall the pacing of the story was close to perfect – I did not notice time passing and wanted more when it was over. The violence was satisfying, and the landscape was a beautiful counterpoint to a rough ride towards retribution. Another excellent piece from the brothers Coen. Good times.