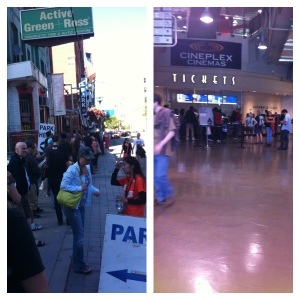 I asked my friend to smell me.

I knew I was still clean in my heart and head, but not my nose. My nose was immersed in the aroma of Scotia. So much so that I could no longer tell when the scents of strangers ended and I began.

This Sunday afternoon there was a fairly typical convergence of bad luck and bad timing that can happen at the festival. Throw in the interesting decision to use all of the Scotiabank instead of splitting the human traffic amongst other theatres and having three movies all start close go each other and you have the makings of a disaster worthy of a Midnight Madness pick.
If the weather had been 5 degrees warmer or 5 degrees colder with some rain perhaps there would have even been some real physical harm.
As it was, the amount of time people were trapped in line, well away from venue bathrooms, and more importantly venue air conditioning the more the discomfort levels grew.
I trust that the team will find ways to turn this around. In the past, most notably with the horrific line conditions at the first year of AMC the headsets and volunteers were able to implement change within he week, and continue to improve year over year.
A few things that could have helped today
– Giving the orange shirts Velcro signs so some could see at a glance what theatres were in the outside line.
-Advance notice to partners so someone , anyone could hand out some free $hit. Water, chocolate, tiny coffee – anything.
-Some way for singletons to deal with bodily functions without losing their place in a long line for a movie that is behind schedule.
The worst part is it affected my enjoyment of the film.