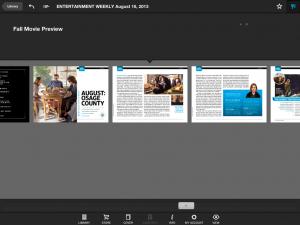 Picked up the 2013 Entertainment Weekly Fall Movie Preview. This year I went for a physical and digital copy instead of buying two copies (one for work and one for home).

Every year I go into this thinking that there are going to be nearly 300 movies to choose from so I don’t need to worry about using the release dates in EW to winnow down my choices and ever year I am wrong.

Also, every year I say that I will end up seeing the movies that are released in late September or early October anyway so I don’t need to waste one of my precious tickets on them, but inevitably I end up seeing at least one or two movies that will be out in a month OR I end up waiting a year until something is out on Netflix or DVD because I get so burnt out after TIFF I find it almost impossible to enter a movie theatre for months. Seeing movies with regular audiences where at least one person is part of  a couple that was dragged there and didn’t choose to wait in numerous line ups and pay double just reminds you how many people feel compelled to illuminate the entire fucking theatre during a movie multiple times to check the time.

You know what time it is? It’s movie watching time.

I truly look forward to the day I lose it in public and just creep up on someone checking their facebook in the middle of a movie and grab it and just quietly run out of the theatre.

While it is safe to assume at least half of the Gala films will be released before the end of 2013, it isn’t always as easy to tell with the Special Presentations. I enjoyed the delightful Thank You For Sharing last year as a schedule filler, convinced it would be released within months due to the Gwyneth and the Ruffalo – and that it was actually quite lovely, but it has yet to be released.

Rush, August: Osage County and  The Fifth Estate will all be out before the end of the calendar year.